‘A Table’ at Hackney WickED 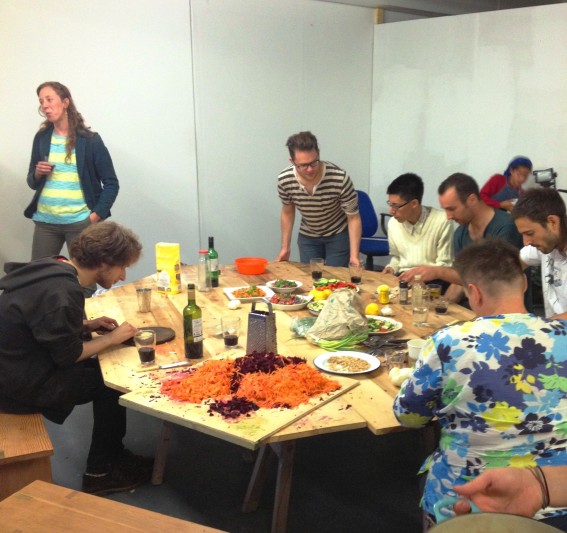 This happened about a month ago now, but I wanted to share it anyway.

In August I went to Hackney WickED Art Festival with a few friends and ended up unexpectedly going to an event at the Arbeit Gallery, hosted by Exchange Projects. We turned up a bit damp and straggly because the weather was awful and we’d been playing with raw clay at our friend’s exhibition down the road. We were also somewhat unsure of ourselves because we had absolutely no idea what to expect, having been told that it was something along the lines of ‘making a table together and then eating some food’.

And that is basically the gist of what happened. Well, the table had actually already been made by two very capable ladies with a drill and some wood, but we arrived in time for the cooking bit. All participants were given a task and I volunteered my flat bread making skills. Everything was very fresh, vegetarian, and cooked on two camping stoves, but the result was kind of excellent. We ended up with some pretty extraordinary salads, a vegetable curry with rice and (ahem – a few) flat breads. After a day of cider and salt & vinegar twirls, it felt good to have something with nutrients.

Once the food had been cleared there was a somewhat convoluted round table discussion about madness led by a performance artist who was exploring the concept in his work. A better description of it can be found here. The main point of it for me though was the cathartic act of cooking and eating a simple meal together – or as the organisers described it ‘Chopping, talking, tasting and hosting. Artists pile displaced ideas on plates of unsettled grub.’